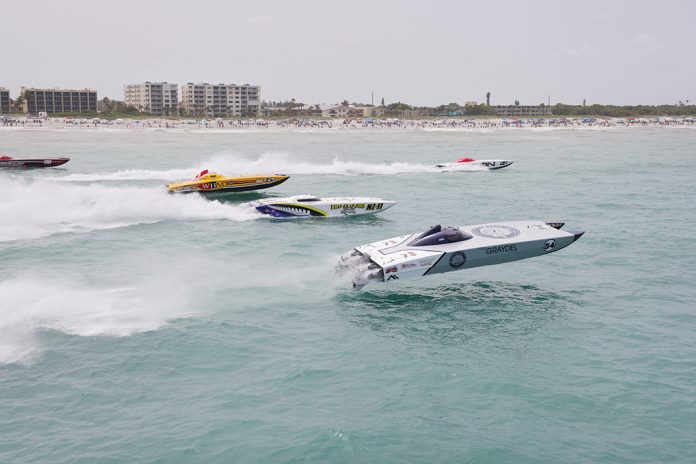 The APBA National Championship Series got off to roaring start at the Thunder on Cocoa Beach.

The first race of the offshore season tends to be a shakeout as teams are still getting comfortable with their boats after making improvements in the offseason. With just eight races in the American Power Boat Association Offshore National Championship Series, teams must come ready to race.

That was the case for the season opener in Florida at the Thunder on Cocoa Beach where nearly 60 teams turned out in May. The event, produced by P1 Powerboat, featured a 7.5-mile course and rough water to greet the racers.

Thunder on Cocoa Beach is a terrific opener for the offshore race season and while the rain dampened the Friday block party in downtown Cocoa Beach, it didn’t stop race fans from the sun-filled weekend that included a Saturday night concert by Generation Radio and a full day of racing on Sunday.

When the spray settled in Cocoa Beach, the winners were some familiar names from the 2021 season with a sprinkle of new competitors.

Super Stock had the largest field with 11 catamarans for the start but quickly became a two-boat race between Jackhammer in the 32’ Victory and LPC in a 32’ Doug Wright with both competitors running a pair of Mercury Racing 300R outboards.

Driver Reese Langheim and Ricky Maldonado in Jackhammer pushed it to the limit for the victory with LPC’s Anthony Smith and Loren Peters finish second and Team Allen Lawn Care and Landscaping was third.

Cocoa Beach marked the debut of the Mercury Racing 450R Factory Stock class and the inaugural race had just two entries, but more competitors are expected to join as the season progresses. Running in an MTI, KLOVAR Motorsports of Randy Keys and Billy Allen outpaced the MTI duo of Taylor Scism and Johnny Tomlinson.

The series moves to Lake of the Ozarks, Mo., in early June and then three races over five weeks starting in Sarasota, Fla., July 2-3.