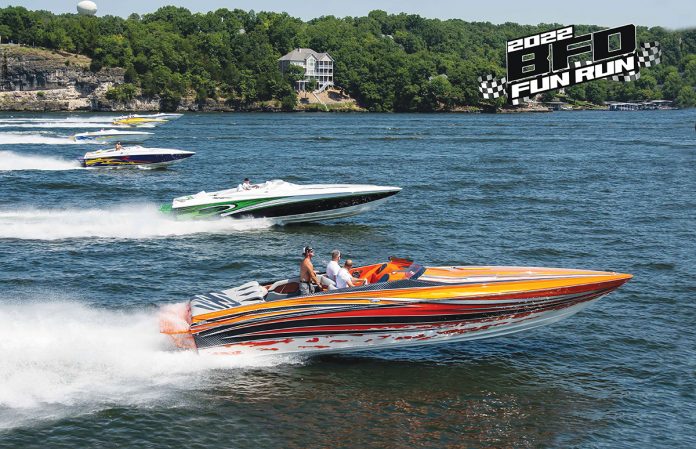 The Baja, Fountain and Donzi boat brands have been around collectively for 150-plus years and have developed a large following over the decades. When Big Thunder Marine started the BFD Poker Run five years ago, the Lake of the Ozarks marine dealership wanted to recognize the legendary brands and its customers.

With 85 boats registered—and dozens more participating unofficially—for the BFD Fun Run in late July, it’s a reminder of how popular the brands remain.

“We just wanted to bring our Baja, Fountain and Donzi owners who have purchased from us or owners of the brands to show them that we appreciate them,” said Camryn Brumley of Big Thunder Marine.

The fun run was a mix of newer models and decades-old-built Baja and Fountain boats. The boat’s age didn’t matter as the participants just wanted to get out on the water.

“We really didn’t have a good poker run boat until this year,” said Steins, who was one of 20-plus Donzi owners to attend the fun run. “The lake can get a little rough, so it takes a pretty good-sized boat to go down there and not get beat up too bad. We finally purchased the Donzi to be able to do (poker runs).”

The BFD Fun Run kicked off with a registration party Thursday night in the Big Thunder Marine Speed and Luxury showroom. Fun runners received a goodie bag that included a T-shirt, boat sticker, marine wireless charger, Donzi koozie, Baja floating keychain and a Fountain lanyard. A catered dinner was served among the new Fountain and Donzi boats in the showroom.

“It was a chance to hang out and catch up with other people,” Brumley said. “It was a great way to reconnect with our customers and say hi to them.”

After a catered breakfast at Camden on the Lake Resort on Friday morning, the boats left in flights of 10 boats about 10 minutes apart. The fun runners had 10 potential restaurant stops and could go to as few or many as they wanted.

Brett Browning participated in his first BFD Fun Run with his nine friends and family in a Fountain 38SC. They went to Bear Bottom Resort, Franky and Louie’s, Coconuts at the Lake among other stops running with other Fountain center console owners.

“We’d pretty much grab a drink and an appetizer at each bar and stay for an hour or so and then keep rolling,” said Browning, who lives outside of St. Louis.

Brumley said one customer, who moved to Lake of the Ozarks two years ago, used the fun run to check out new waterfront restaurants and bars.

“Instead of just going to the same spots as he had always been to before, it was a great opportunity for him and his family to go to new locations,” Brumley said.

While most of the boats that entered were built in recent years, a few owners brought boats that were built in the early 1990s. “That was really cool to see the old Fountain, Donzi and Baja boats, and then the newer ones,” Browning said. 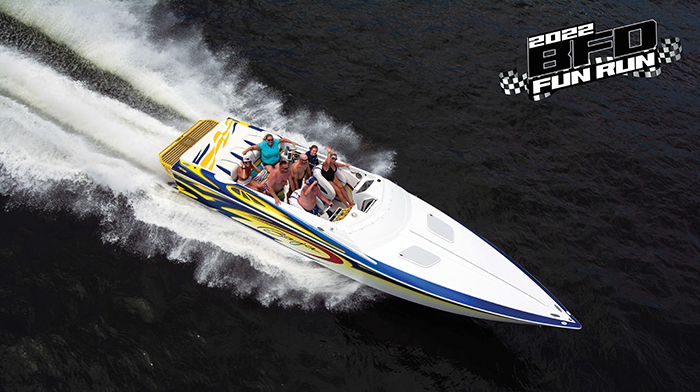 Owner Fred Ross purchased Big Thunder Marine in 2015 and launched the event in 2018 to raise awareness and comradery about the Baja, Donzi and Fountain brands, which is built by Ross’ other company, Iconic Marine in North Carolina.

“I feel like once you buy a boat from Big Thunder, then you become like part of a big family,” Browning said. “They’re great people and they’re all good friends and everybody gets along well. We all hang out with those guys pretty much every weekend.”