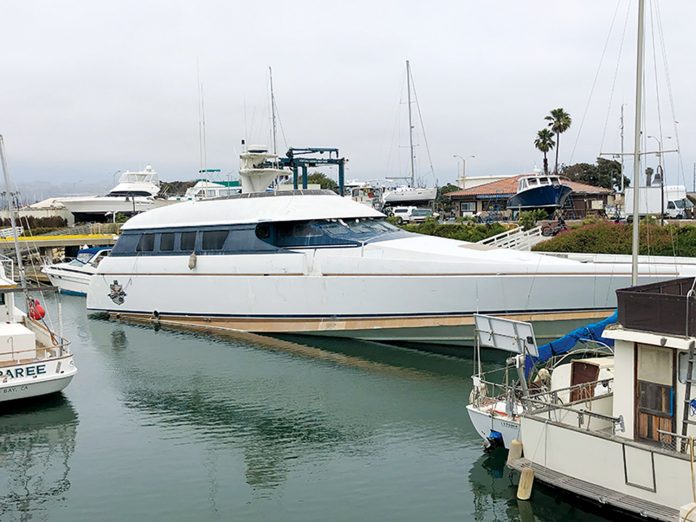 It’s the end of an era. Thirty-three years after setting the Trans-Atlantic crossing record, the Gentry Eagle was scrapped in a California harbor after sitting there deteriorating in the sun and salt air for years.

The speed boat converted into a yacht was one of the most famous boats in the world when Tom and Norman Gentry raced the Atlantic to reclaim the record for the United States after British billionaire Richard Branson had broken it.

I remember the era well as Poker Run America’s sister publication Power Boating Canada, an international magazine, covered the record run, which was a massive financial undertaking even three decades ago. Tom Gentry spent $7 million to build the boat powering it with twin 3,480 hp MTU turbo diesels and a 4,500-hp turbine. The Gentry Eagle had 11,500 total horsepower.

The ship was built with the singular purpose of breaking the 3,000-mile race from New York Harbor’s Ambrose Lighthouse to Bishop Rock off the British Coast. The first Trans-Atlantic record attempt failed in 1988 because of a storm and the Gentrys tried again in 1989 smashing the old mark in 62 hours, seven minutes. Branson completed the run in roughly three days and eight hours.

The Gentry Eagle would go on to set endurance records from New York to Miami and Florida to the Bahamas. More record attempts were in the works when Tom Gentry was in an accident at the 1994 Key West World Championships and died at age 67 after three years in a coma.

Gentry’s son Norman, a developer in Honolulu, Hawaii, tried unsuccessfully to sell the Gentry Eagle for years. Even with the ship’s pedigree, the Gentry was a tough sell spending the last 15 years sitting in the Ventura Harbor in Ventura, Calif.

The 117-ft. ship had become oxidized by the sun and was frequently covered in bird droppings. The boatyard needed the slip for other boats and Norman made the hard decision.

“It’s kind of like trying to sell an Indianapolis (500) racecar, everyone thinks it’s cool, but no one wants to buy it,” Norman told a local newspaper.

The Gentry Eagle was built from aluminum, which made the boat lighter and faster than endurance-record competitors. Crews using a backhoe picked apart the ship for scrap metal, completing the demolition on May 14.

It’s a sad ending to a historic speed boat and a throwback to another era. Billionaires are now more interested in going to space than breaking endurance records on Earth.